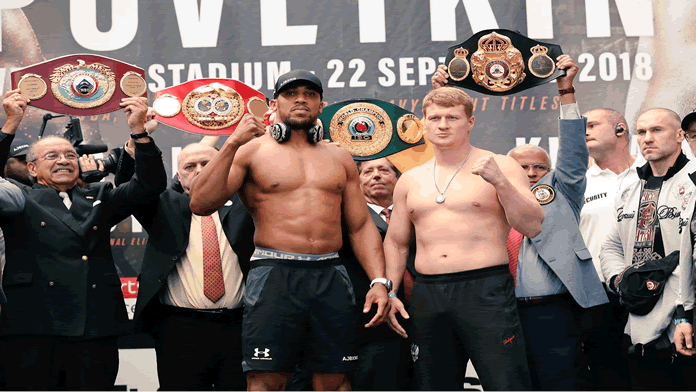 Promoter Eddie Hearn was also joined by a number of his fighters including Dillian Whyte & Dereck Chisora who saw heavyweight champion AJ including the undercard boxers weigh-in ahead of the September 22nd fight night at the national stadium.

Alexander Povetkin is very light compared to most in the heavyweight division and is lighter than he was in his last victory against David Price weighing 16st 5lbs.

AJ on his opponent (plus himself lighter on the scales) :

“He’s going to be quick, so I’ll put on my dancing shoes and be fast with my feet.

“I’m a physical, big strong guy, who knows how to box. 246Ib is a good weight for this fight.”

“I’m very happy about the difference in weight, I feel great.

“I live a calm life, not much excitement, I’m ready. I will give everything I have. It is one of my last big chances.”

Live on DAZN in the US & Sky Sports Box Office in the UK. First bell for the main event will be around 10pm so ring walks 9:50pm.

Thanks to all those that came down to the weigh in. Roll on tomorrow night! 👊🏼🇬🇧🔥 #JoshuaPovetkin

Michael Buffer was the man on the microphone to welcome on stage the main event fighters.

In attendance amongst the few thousand fans were some well-known faces.

Jake Wood aka Max Branning made an appearance who is a big boxing fan who with Spencer Oliver host a great boxing podcast weekly called Pound for Pound and are joined by top names from the sport, alongside celebrity boxing fans.

Sky Boxing Pundit Carl Froch was around with the fans who were demanding selfies with the Champion gave his view :

“Many people are saying it’s going to be an easy night – but I’m not so sure.

“I’ve been watching this Povetkin kid and he can fight.

“He is a bit cuter than Parker. He’ll use his feet to get close into AJ.

“If Joshua is forced to fight then who knows, it could be whoever lands first wins.”

Heavyweight Champion AJ to make debut in the US vs 'Big Baby' The boxing fight will take place...
Read more
Latest News